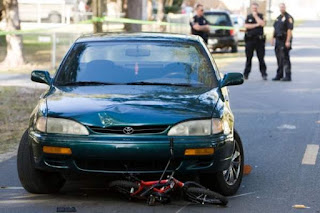 A 14-year-old girl from Cutchogue was riding her bicycle when she was suddenly hit by a car.  She was taken to the hospital Saturday morning after the accident, Southold Police said.

Emily Gatz was struck by Henry Oman, 74, both from Cutchogue, as he was traveling south on Skunk Lane at about 9 a.m., police said.  Ms. Gatz was taken by Cutchogue Fire Rescue to Eastern Long Island Hospital (ELIH) for treatment of an ankle injury, according to the report.

According to Police, Mr. Oman was recently involved in another accident with a pedestrian in Southold. Just last month on Sept. 25, he struck a 72-year-old Southold man who was crossing Main Road near the IGA store, police said. Mr. Oman, who was turning east onto Main Road from Youngs Avenue, claims he did not see the man due to sun glare.

If you or someone you know has been injured due to the negligence of another call the experienced Personal Injury Lawyers of Buttafuoco & Associates 1-800-669-4878.