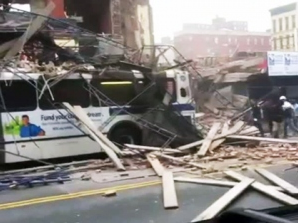 The brick facade of a 2-story building at 305 West 125th Street, which was being demolished, collapsed and sent debris onto scaffolding protecting the sidewalk surrounding the site around 9:15 a.m. Part of that scaffolding collapsed as well. Debris from the collapse struck the back of a city bus which had 30 passengers on board, 1010 WINS’ Terry Sheridan reports.

Gisselle Ubeda, an employee of the nearby Rainbow store, described the scene. “It looks terrible,” Ubeda said. “Part of the building has fallen.”

Witnesses said the front of the building started leaning forward amid the demolition, and tipped over.

If you have been injured due to the negligence at a construction site: debri/tools, pipes, etc falling from a height causing serious injury or an electrician, plumber or mason injured while on the job. Call our experienced Construction Injury attorneys today at 1.800.Now.Hurt (1.800.669.4878)