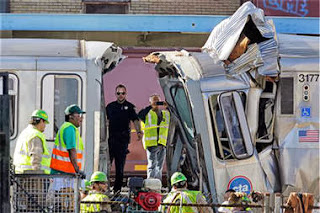 More than 30 people were seriously injured after a pair of trains collided.
The crash happened just before 8 a.m. at Harlem Avenue and Interstate 290 in suburban Forest Park. A westbound train that stopped at the Harlem station was struck by an out-of-service, unmanned train heading toward the Loop.
Chicago Transit Authority officials reported 33 people, many complaining of severe neck or back pain were transported to nine area hospitals.
Robert Kelly, of Amalgamated Transit Union 308, said it’s still unclear what happened and how the train got out of the station. “Both the supervisor in the station at Forest Park and the motorman who was sitting in the station said there was nobody on the train as it went through and collided with the other train,” Kelly said. “This is baffling everybody,” he said.
Chicago Transit Authority spokesman Brian Steele said there are more questions than answers as staff reviews surveillance video and talks to employees. “We don’t know what the circumstances are that led to this train to begin moving on the path that it did,” Steele said. “It shouldn’t have done so and the question of why is what we’re looking into.”
“That train never should have made it to the Forest Park station. It should have been tripped in the yard,” Kelly said. Someone had to start the train, and even if they bailed out, it had to travel up an incline and pass through three different fail safe systems designed to stop it. The last fail safe is located in the cab itself, designed to alert a motorman of impending danger ahead.
Witnesses said at least one person was taken away on a stretcher, but the CTA tweeted the injuries were “minor.” Loyola University Medical Center confirmed they received four patients from the collision but said their injuries were “not serious.”
“I went forward and caught the rail,” one passenger said. “I jammed my hip, my feet and my leg.”
Westlake Hospital in Melrose Park said they were treating two patients in good condition and West Suburban Medical Center in Oak Park reported they received one patient in good condition.
Comments are closed.