Home / Blog / 4 Teens DEAD on Parkway – driver only had Permit

4 Teens DEAD on Parkway – driver only had Permit 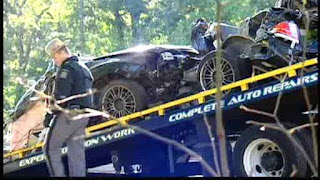 A 17-year-old driver lost control on the Southern State Parkway at 3:40am and slammed into several trees.

Joseph Beer, of Richmond Hill, Queens, survived the crash that killed his four passengers after they were ejected rom the 2012 Subaru Impreza when it failed to negotiate a westbound curve on the parkway between exit 18 (eagle avenue) and exit 17 (Hempstead Ave).

Beer was taken to Winthrop University Hospital in Mineola where he was treated for injuries.

A neighbor said the sound of the accident was like “an explosion” – so loud that it awakened him.

This stretch of Southern State Parkway is notorious for being the scene of fatal car wrecks for nearly three decades.    So much that it has been called “Blood Alley”.

Robert Sinclair, spokesman for AAA New York said “The Southern State Parkway is the exemplar of the poorly engineered roads typical of our area.   It’s lanes are too narrow, the road is too twisty and too hilly.  The on and off ramps are too short to allow for adequate acceleration and braking.”

If you or someone you know has been injured in a car accident call the experienced attorneys at Buttafuoco & Associates 1-800-669-4878.