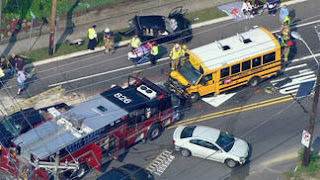 Eight people were injured, one critically, following a chain-reaction crash that involved a school bus and six other vehicles in Camden County Wednesday morning.

The crash happened at about 9:30 a.m. on the Black Horse Pike near Chews Landing Road in Glendora, New Jersey.

The crash involved a school bus and six other vehicles.

According to reports, the occupants of the school bus were senior citizens who were en-route to a senior center. A driver and five others were aboard the school bus.

Police say a Ford pickup truck, a 2009 Mitsubishi Galant and a 2000 Kia were traveling south on the Black Horse Pike and stopped in traffic when the school bus, which was also travelling south, struck the rear of the Kia.