Home / Blog / Airbag Injuries Can Occur Even When They Work

Airbag Injuries Can Occur Even When They Work 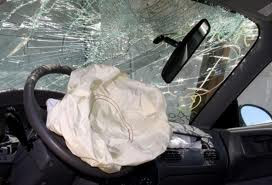 Motor vehicle crashes are a leading cause of morbidity and mortality in the United States. Airbags drastically reduce both morbidity and mortality from crashes, but with the increased use of airbags there has been a corresponding increase in the number of injuries attributable to these devices. This review discusses the history and mechanism of action of airbags, along with the spectrum of injuries seen as a result of their deployment, and future advances that may be of benefit in increasing motor vehicle safety.

There is convincing evidence from both sides of the Atlantic that airbags provide excellent protection against serious injury. However, there is an increasing amount of data on injuries directly attributable to these devices.

In a retrospective review of United States National Highway Traffic Safety Administration (NHTSA) data from 1980 to 1994,12 there were 618 injuries, of which 42% affected the face, 33% the upper limb, and 9.6% the chest. The most important finding, however, was that 96% of all injuries were classified as minor. This suggested that although airbags doubtless do cause injury, such injuries must be viewed in the context of the more severe injuries that they prevent.

Frampton (R Frampton, et al, IRCOBI conference, Montpel- lier, France, 2000) compared the rate of abbreviated injury score (AIS) 2 or greater injury in UK and European airbag equipped cars against non-equipped, and found a statistically significant reduction in these serious injuries (24% v 29%, p=0.02). Of note, he also found that the pattern of AIS 2+ injury appears to be changed by the presence of airbags, with a greater tendency for upper limb injury, and less head and neck injuries. For minor injuries (AIS 1), there were still more arm injuries in airbag fitted cars, but less head, neck, and leg injuries. These data were similar to that produced by Lenard (J Lenard, et al, 16th International technical conference on the enhanced safety of vehicles).

There have been multiple reports of head and neck injuries related to airbags, mostly (but not uniquely) from the USA. Injuries include facial trauma, 8 temporomandibular joint injury, 13 decapitation, 14 and cervical spine fractures. 15 16 In addition to bony neck injuries soft tissue injuries are also seen with both types of system, including damage to the vasculature.17–19 The eye seems to be particularly vulnerable to injury, especially if spectacles are worn20: injuries include orbital fractures,21 retinal detachment,22 and lens rupture.23 The chemicals involved in inflating the bag have been implicated in eye injury,24 as have the cover components.25 Front seated children are also at risk of eye injury.26 Eye inju- ries are more commonly reported in the USA.

Despite the many case reports and series discussing head and neck injuries arising from airbag deployment, it is important to remember that the head and neck are at very significant risk in a frontal impact, from contact with the steering wheel (especially if a seat belt is worn). Frampton provides good evidence (R Frampton, et al, IRCOBI confer- ence) that UK and European airbags are effective at protecting against serious head injury: in this study the rate of AIS 2 or greater head injury was 32% lower in the presence of airbags (p<0.05); the reduction in AIS 2+ facial injuries was 55% (p<0.05). Comparing airbag with no airbag showed a trend in these head injured patients to have more brain injuries and less skull fractures. This non-significant trend may represent airbags providing greater protection to the bony elements of the skull than the brain tissue.