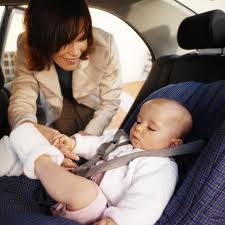 Evidence from the United States suggests that passenger air- bags are associated with an increased risk of death in children. Passenger airbags in vehicles have been associated with fatal and non-fatal injuries in children of all ages. Two scenarios are thought to contribute to these injuries: infants in rear facing child seats strapped into the passenger seat may sustain severe head and neck injuries caused by the deployment of the bag and forward facing children who are unbelted (or improperly belted) can have their heads in the deployment area of the bag, once again causing severe head injuries.

Graham presented data from the US that suggest that passenger airbags are not only associated with cases of child fatalities, but also that the protective effects of the bags in terms of lives saved is outweighed by the lives lost. However, for each of the child lives lost by passenger airbags in the USA, 5–10 adults are saved: this figure is 75 lives saved to one life lost for driver’s side airbags.

In the USA, about one third of children traveling in cars do so in the front seat; this figure is less than 15% in Europe (this may be explained by legislation that has only recently been repealed, prohibiting children from traveling in front seats in several European countries). The rear seats are known to be safer than front seats for passengers of any age, and there is now evidence from the US that the presence of a passenger airbag is enough to make parents seat their children in the rear, to protect them from airbag associated injury. Thinking may be changing: this can only have a beneficial effect on child injuries.