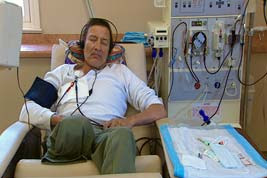 Native Americans are at a greater risk of having diabetes than anyone. While almost six percent of the U.S. population has some form of this disease, among the Native American populations, that number is twice as high.

Prevalance of type 2 diabetes among Native Americans in the United States is 12.2% for those over 19 years of age.

One tribe in Arizona has the highest rate of diabetes in the world. About 50% of the adults between the ages of 30 and 64 have diabetes.

Diabestes is the most frequent cause of non-traumatic lower limb amputations. The risk of a leg amputation is 15 to 40 times greater for a person with diabetes. Each year 54,000 people lose their foot or leg to diabetes. Amputation rates among Native Americans are 3-4 times higher than the general population.

The Dangerous Toll of Diabetes

There are 15.7 million or 5.9% of the population in the United States who have diabetes.

While an estimated 10.3 million have been diagnosed, 5.4 million people are not aware that they have the disease.

Each day approximately 2,200 people are diagnosed with diabetes. About 798,000 people will be diagnosed this year.

Each day approximately 2,200 people are diagnosed with diabetes. About 798,000 people will be diagnosed this year.

Health care and other costs directly related to diabetes treatment, as well as the costs of lost productivity, run $98 billion annually.

Statistics from the American Diabetes Association