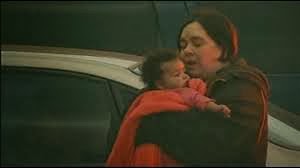 A 58-year-old woman, Arlene Pickett, was killed in an apartment fire in Ambridge over the weekend.  She was attempting to get out of the burning building and was found in a stairwell.

Neighbors said they saw smoke pouring out of the windows and could hear people screaming from inside.
“It was amazing, little kids crying for their mother. It was terrible, terrible. The flames were coming straight out like a furnace,” witness Mike Vougias said.

People living nearby said they piled up mattresses so those trapped could jump to safety. A baby was also thrown out the window and was safely caught by a man standing by.

“We grabbed the mattresses and piled them up below the window and they jumped out one-by-one and tossed the baby down,” neighbor Siera Mixter said.

“The mother finally jumped out first. The dad threw the baby out. There was a gentleman that caught the baby,” witness A.J. Mixter said.

“I caught the baby. I just put my arms out and he fell into my arms,” Bob Dunn said.