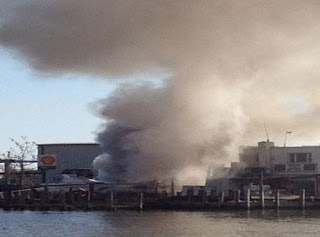 A Thanksgiving fire that began on a boat near the Babylon Village Docks on Thursday has left one man injured and property damaged.  The incident occurred at the Babylon Docks near Fire Island Avenue at Cedar Lane.  Official say several boats are on fire in Babylon.  An unidentified 17-year-old man was burned and was airlifted to the hospital.  He suffered first and second degree burns to his face and arms.

A Suffolk County police officer responding to the fire call was injured in an unrelated crash. According to reports, the officer’s patrol vehicle was struck by an SUV, which was traveling southbound at Robbins Avenue. The driver’s side door of SCPD Unit 116.