Fungus found in steroid injections produced by this Massachusetts specialty pharmacy matched the fungus linked to the outbreak. The officials said they’d confirmed the presence of the fungus, Exserohilum rostratum, in unopened vials of a steroid produced by the New England Compounding Center.
The vial came from one of three lots recalled by the Framingham-based company last month, officials from the U.S. Centers for Disease Control and Prevention and the U.S. Food and Drug Administration said.
The CDC and state health departments estimate that roughly 14,000 patients may have gotten steroid injections from the three lots, and nearly 97 percent of them have been contacted for medical follow-up.
The steroid, methylprednisolone acetate, is injected into patients for back and joint pain.   However, the contaminated steroid was also used on patients  for pain in their knees and shoulders. The company has since shut down operations and stopped distributing its products, health officials said.
Meningitis is a potentially fatal inflammation of the lining surrounding the brain and spinal cord.
On Friday, the New England Journal of Medicine published two articles on the outbreak, including a report on what’s believed to be the first case in the outbreak — a man in his 50s with a history of back and joint pain. He showed up at Vanderbilt University Medical Center in Nashville complaining of head and neck pain. Despite a series of medical interventions, he died after a 22-day stay at the hospital.
An autopsy revealed the presence of the fungus Aspergillus fumigates. It’s the only case of this type of fungus detected in the outbreak so far; all other cases apparently involved the fungus Exserohilum rostratum, the journal said. 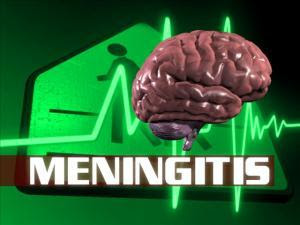 At this point, the best treatment seems to be at least three months of antifungal therapy, the doctors who wrote the commentary said.
The FDA said it was advising all health care professionals to follow up with any patients who were given any injectable drug from or produced by the New England Compounding Center. These drugs include medications used in eye surgery, and a heart solution purchased from or produced by the company after May 21.
Health officials said they expect to see more cases of the rare type of meningitis, which is not contagious, because symptoms can take a month or more to appear.
Infected patients have developed a range of symptoms approximately one to four weeks following their injection. People who have had a steroid injection since July, and have any of the following symptoms, should talk to their doctor as soon as possible: worsening headache, fever, sensitivity to light, stiff neck, new weakness or numbness in any part of your body or slurred speech, the CDC said.
Infected patients must receive intravenous drugs in a hospital.
Buttafuoco & Associates is now accepting meningitis cases caused by this contaminated steroid.  If you or someone you know have suffered injury due to a defective drug call the experienced Attorneys at Buttafuoco & Associates 1-800-669-4878.
Comments are closed.