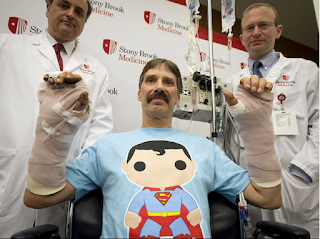 STONY BROOK, N.Y. — A Staten Island man suffered a devastating accident on the job that sliced off both of his hands. Fortunately, doctors on Long Island were able to save them and reattach them.

Kenneth Klapak, who grew up in North Babylon, knows where the blessings flow.
“I got the ‘big G’ on my side and an incredible team on my side,” he said. “So I think things will all work out for the best in the long run.”

“To see that my hands are attached. I hit lotto, I am a rich man,” Klapak said.

In a horrific moment that changed his life forever, Kenneth Klapak accidentally caught both hands in a large piece of machinery at a North Babylon sheet metal factory, slicing through both wrists and leaving them hanging by a thread of tissue.
“It caught my hands as I was pulling them out. It happened in literally a split second and it was over,” Klapak said.

He was flown by helicopter to the hospital, where doctors were able quickly to rejoin the cut veins, arteries and tendons in both hands in what Klapak called “an ongoing miracle.”

Two teams of doctors, one meticulously working on each hand, began the laborious 8-hour operation.

“At a center where you have several hands surgeons with all of these skills is the only way you can accomplish saving two hands at the same time,” said Dr. Mark Epstein, a plastic surgeon.

It is rare, these doctors say, to have a patient with both hands severely injured, and a patient like Kenneth who relies so heavily on his hands for his both work and his long time love of playing the guitar.

“Now I play, up until the accident, I have been playing for the church which gives me a lot of pleasure. I’ve always loved to play music,” Klapak said.

Klapak said he was working at Anron Sheet Metal Corp. when his hands were caught in large machinery that bends galvanized sheets of metal commonly used in air-conditioning vents. Klapak, who lives in Staten Island but grew up in North Babylon, said he worked at the firm for about 12 years.
Difficult recovery and rehabilitation, doctors say, will take time.
“A lot of his success will depend on his own desire to achieve,” Dr. Epstein said.
Still, Kenneth’s wife Kimberly believes his will and faith is strong.

“He’s going to be playing again. I know he will. And he will be playing better than he did,” Kimberly Klapak said.

“I will work as hard as I can to get back as good as I can,” Klapak said.