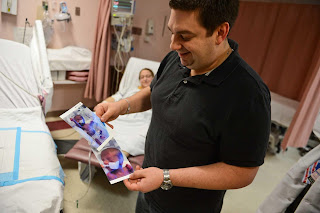 Have you ever wondered if it is safe to have a dog around babies or pregnant woman?  Check out this story…
A North Merrick dog is being heralded for helping to save the life of a pregnant woman and her premature daughter.  The hero is a 1-year-old goldendoodle named Louie.
Janelle Giannetta was annoyed with her dog Louie after he playfully jumped on her and accidentally scratched her face.  Just a few hours later the puppy was out of the doghouse after saving her life.
Giannetta, 26 weeks pregnant with her first child, said she was not feeling well and went upstairs in her North Merrick home to take a nap.  Her husband, Richard Giannetta, 33, stayed downstairs to clean up for a family birthday party later that day.
Shortly after, the dog (who is not known as a barker) began barking incessantly.
In the upstairs bedroom he found the 75-pound dog standing on the bed barking at his wife. Janelle was having a seizure, her tongue was rolled back and she had a ring of white foam around her mouth.
Richard immediately called 911 and said he had a hard time getting the protective Louie away from his wife.
“I had to lock him in another room,” said Richard.
Janelle was rushed to Nassau University Medical Center in East Meadow, where she was quickly diagnosed with eclampsia.  Eclampsia, which affects about 1 in 2,000 pregnant women, is a potentially deadly condition in which the mother develops very high blood pressure, causing seizures and potentially a stroke. Janelle, who had seen her doctor that day, said she had shown no signs of pre-eclampsia, marked by high blood pressure and high protein in the urine.
Dr. Peter Hong, chief of NUMC’s high risk pregnancy service, said Janelle’s blood pressure was “very, very elevated — severe enough to cause a stroke.”
The only “cure” for the condition is to deliver the baby, he said, so the decision was made to perform a Caesarean section. Charlotte Marie was born around 2:25 a.m. weighing a mere 1 pound 7 ounces.
The baby is in the neonatal intensive care unit, where she is expected to stay until July — her scheduled due date.
Both Richard and Janelle were so thankful for the emergency medical technicians and the hospital for their quick action. But Doctor Hong credited Louie.
“In my opinion, the dog is the real hero,” Hong said. “If not for the dog’s barking, she could have had one seizure after another, after another . . . and she would have gotten care a lot later, and that would have made my job much harder.”
SHARE