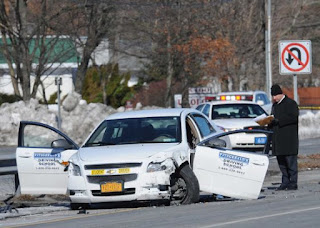 The Fitsgerald Driving School instructor, Leonard Sloan, was driving the school’s Chevrolet Malibu when he crashed into the other vehicles on 347 (Nesconset Highway). He most likely had a heart attack, police said.

Leonard was traveling west when his vehicle struck three cars that were in the eastbound turning lanes waiting to turn left onto Davis Avenue.

There were no student drivers or passengers in the car at the time of the accident.

He was taken to St. Charles Hospital in Port Jefferson, where he was pronounced dead.