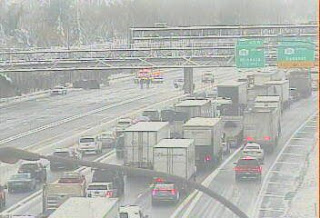 A 34-year-old man with four others in his Nissan Pathfinder was eastbound on the LIE (New York) when the driver lost control and struck the center median about 8:40 a.m. Thursday. The vehicle spun across the left and center lanes and collided with a Ford Explorer driven by a 30-year-old woman, detectives said.

Three of the four passengers and the Pathfinder’s driver were transported to area hospitals; the fourth passenger refused medical attention at the scene.

The driver and one of the passengers are listed in critical condition, police said.

The driver of the Explorer was also transported to local hospital on Long Island for non-life-threatening injuries. No charges have been filed in the accident, which closed the LIE’s eastbound lanes during the morning rush hour for a while and impacted traffic near Exit 40, the ramp for Jericho Turnpike at Syosset, throughout Thursday.

If you or someone you know was injured in a car accident call the experienced car accident lawyers of Buttafuoco & Associates 1-800-669-4878.

One Response to “Eastbound lanes of LIE close after car accident”