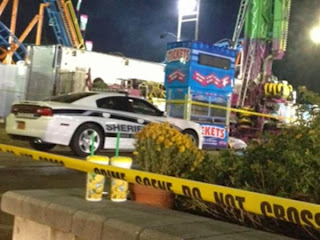 A North Carolina State Fair worker who was disassembling a ride was taken to the hospital after suffering a severe leg injury.

Brian Long, a spokesman for the state Department of Agriculture, said Anesto Newell, 32, was injured about 3:30 a.m. as he was taking apart a ride called the Vortex. The ride is not the same one – also called the Vortex – that was idled last week after five people were hurt.
Family members who were also working nearby said he suffered a broken back, pelvis and leg when a piece of the ride fell on him.

“All I saw was this yellow hoodie laying on the ground and I said, ‘Oh no, that’s my brother,'” said Tywan Newell. “When I got there, the ride was on top of his body.”

Anesto Newell was taken to WakeMed where he had surgery and was in critical condition in intensive care.

Fair/Festivals have proven to be an unsafe environment in recent years with a number of injuries and even fatalities reported due to faulty rides and defective equipment.