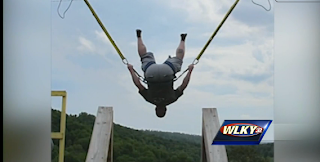 A Leitchfield man is on the road to recovery after a bizarre trampoline accident.

Doctors at the Kleinert Kutz Hand Care Center performed a rare surgery after both of Jonathon Durall’s biceps ruptured.
Seven months after Durall’s accident, the 35-year-old is trying to get back to normal.
Durall strapped into a bungee trampoline and with his arms settled into the restraints, he hoped to backflip into the air.
Durall got some height while jumping but then the jump took a turn.
“And then the last one, I was doing the backflip and I was coming down face first and I flexed my muscles,” said Durall.
Doctors say the strong contraction of Durall’s arms, combined with the resistance of the bungee, created a recipe for a dangerous injury.
“I didn’t feel a thing when it happened, I heard a simultaneous pop,” said Durall.  “I look over and my biceps on both my arms are up into my shoulders.”
That popping sound that Durall heard was a bilateral distal bicep tendon rupture in both arms.
Essentially, both biceps tore from the bone and needed to be reattached.
“It’s very rare, its known to happen, but it’s not very common, usually its one arm or the other,” said Dr. Yorell Manon-Matos from Kleinert Kutz.  “The biceps retracted and essentially curled up in his arm.”
Manon-Matos performed the uncommon surgery.
The operation was a success, and while Durall still has a long way to go, he’s hoping to soon get back to his volunteer work at several Kentucky caves.
He said he does not plan to get back on a trampoline.
SHARE