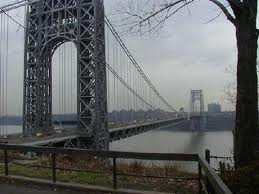 A 32-year-old Manhattan woman was killed in a single-car wreck Tuesday morning after she lost control of her minivan on the George Washington Bridge, authorities said.

Patricia Salcedo’s Toyota van flipped several times and landed on its roof on the New York side of the bridge’s upper level about 4 a.m., authorities said.

She was pronounced dead on the scene. There were no other injuries reported, a Port Authority spokesman said.

The lanes were reopened about 7:30 a.m., authorities said.