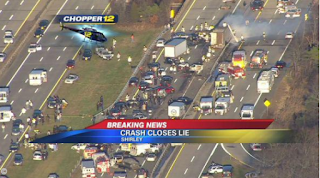 All eastbound and westbound lanes of the Long Island Expressway re-opened Thursday morning following a 35 car pileup that killed one person and injured 33 others.

A 68-year-old woman died after her Toyota Camry was hit in the midst of a 33 car pileup that happened on Wednesday afternoon after a tractor-trailer hit cars in the eastbound lane.

Police said the truck crashed into several vehicles which then set off a domino effect of accidents involving 35 cars that spread out across several hundred yards of the eastbound lanes.

The tractor-trailer was carrying debris from Hurricane Sandy and as a result of its crash caused at least three vehicles to catch on fire, including the 18-wheeler itself.  It is still unclear if the tractor-trailer’s driver, Raymond Simoneau, 42, was among the injured.

Simoneau was driving east on the LIE just past the William Floyd Parkway exit when he lost control of the rig and slammed into several cars, Suffolk County Police said. The car involved in the initial collision with the tractor-trailer “was incinerated beyond recognition, with its tires punctured and paint burned off its body.”

The LIE remained closed in both directions between exits 66 and 69 until shortly after 6 a.m. Thursday, in time for the morning rush. It is not clear what caused Simoneau to lose control of the tractor-trailer and investigation into the matter continues, authorities said Thursday.

The injured were taken to Stony Brook University Medical Center. 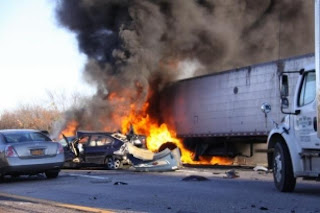 The incident occured in the same week as a 60 car pileup near the Oregon stateline, where a semi-truck driver lost control over black ice and crashed his truck into a concrete median. Cars crashing into each other extended for more than two miles.