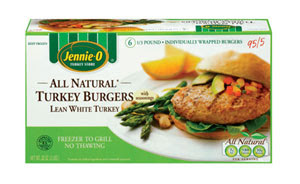 Jennie-O Turkey recalled 55,000 pounds of turkey burger this weekend after being linked to a dozen cases of salmonella in 10 states.

The Willmar company is advising that consumers who have the burgers in their freezer to avoid eating them.

“Instead we are asking that consumers return this product to a Sam’s Club store for a full refund,” the company said on its website.

Jennie-O has established an online resource center at www.jennieo.com/recall to provide more information to consumers about the voluntary recall.

The U.S. Department of Agriculture’s Food Safety and Inspection Service began investigating after the Wisconsin Department of Health and Family Services reported a case of salmonellosis, which is caused by salmonella bacteria and is usually foodborne.

The investigation then widened to include Arizona, California, Colorado, Georgia, Illinois, Mississippi, Missouri, Ohio and Washington in addition to Wisconsin. Twelve people became sick. According to the Food Safety and Inspection Service, three of those who were sickened specifically reported eating Jennie-O turkey burgers before the onset of illness and hospitalization.
All the illnesses occurred between December 2010 and March of this year. The last case was reported on March 14.

Salmonella hadar, the type of bacteria reportedly involved in the outbreak, is most often found among poultry.

The USDA, the U.S. Centers for Disease Control and Prevention and state public health agencies are continuing their investigation. Authorities said that as more information is collected, the recall could widen to include additional turkey products.

The government is advising consumers to use extra caution when preparing raw turkey. To prevent salmonellosis and other foodborne illnesses, people should wash their hands in warm soapy water for at least 20 seconds before and after handling raw meat and poultry. Poultry should be cooked to an internal temperature of at least 165 degrees F.

Symptoms of salmonella poisoning include diarrhea, abdominal cramps and fever within six to 72 hours of infection. Additional symptoms may be chills, headache, nausea and vomiting that can last up to one week.

Salmonellosis can be especially severe, and possibly life-threatening, to infants, the elderly and individuals with a compromised immune system.