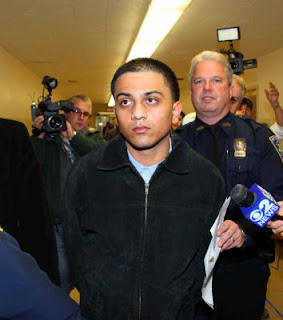 A Queens teenager seemed dazed in October as he wandered through the aftermath of a deadly car crash that “looked like someone had taken a stick to a piñata,” a state trooper testified Wednesday.

“There was debris everywhere. And body parts. Blood all over the place,” said State Trooper Eduardo Arias.

Yet Arias said Joseph Beer, the driver of the car, kept asking, “Are my friends OK?”
Although Beer seemed confused when he asked about his friends, Arias said he was lucid when answering questions about his name, birth date and other facts.

When he brought Beer into an ambulance, the trooper said, he smelled marijuana.
“I asked him if he smoked weed prior to the incident,” Arias told prosecutor Michael Bushwack. “He gave me a blank stare. Then I asked again and he said ‘Yes.’ “

Beer, who now faces aggravated vehicular manslaughter charges in the deaths of his four friends on the Southern State Parkway on Oct. 8, 2012.

Prosecutors have said Beer was high on marijuana and driving more than 110 mph when he lost control of his Subaru Impreza and slammed into trees off the parkway between exits 18 and 17 in Lakeview.
The force of the impact split the sedan in two and the passengers — Darian Ramnarine, Christopher Khan and Peter Kanhai, all 18, and Neal Rajapa, 17, all from Queens — were ejected. They were pronounced dead at the scene.

Beer, 18, of South Richmond Hill, Queens, wasn’t seriously hurt. He is being held without bail. If convicted of the top charge against him, he will face up to 25 years in prison.

At one point, Greenberg showed Beer photos of the accident scene. The teen slumped over as he looked at them, his hand on his forehead.