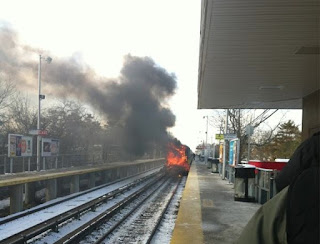 As an equipment train (LIRR) approached the 2nd Street Crossing just west of Brentwood station, the engineer saw a car go around the crossing gate to make its way to the other side. The engineer blew his horn and pulled the emergency brake but was unable to avoid a collision. The train then dragged the vehicle underneath its front car before coming to a stop midway into the Brentwood station. While the vehicle was being dragged, both the vehicle and front train car burst into flames.

Once the fire was extinguished by the Brentwood Fire Department they discovered “two individuals in the wreckage pretty much burnt beyond recognition.” The car owner has been identified but because of the condition of the bodies it will take some time before the victims can be identified. The engineer and one other crew member aboard the train were not injured.

At this point there is only speculation as to why the car did not heed the crossing gates, and though this type of incident is uncommon, Arenas concedes that these scenarios happen. “The railroad is an open system in that everybody has access to right of way. Some of them are behind a fence, some are not,” Arenas explained. “People are intent on doing crazy things.”