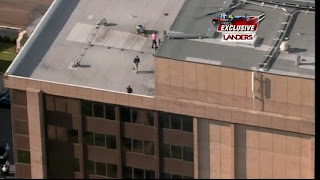 A Memphis worker who fell nearly 11 stories died as a result of his injuries.

The man was rushed to The MED in critical condition Tuesday after falling from the top of Poplar Towers onto an SUV in the parking lot.

“It’s weird that it would happen where you work that’s for sure. It’s been all the water cooler talk around here today,” said Matthew Mars, who works in the building.

The people who work in the East Memphis building are still reeling after police say a man fell 11 stories from the roof landing on a car parked in the back of the building in a space reserved for employees of Carty and Company.

Police are releasing little information including exactly what happened and why the man was on the roof.
Samantha Gadlen saw the man just after he fell. She said he was dressed in a button down shirt and khaki pants.

“I saw him. I saw his clothing. He had on black shoes, and he had a bandana around his face,” she said.
People who work in this building just want to know what happened.

“Everybody is at a loss for words. There’s rumors, [but] nobody knows what’s going on,” said Mars.
Memphis police have not released the identity of the man who fell from Poplar Towers.
Investigators have also not said at this point what caused the fall.