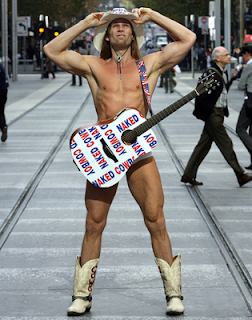 A New York federal judge has dismissed a trademark lawsuit brought by Robert Burck, aka The Naked Cowboy, over a character featured on The Bold and the Beautiful.

The Times Square performer alleged that the CBS soap infringed his trademarked brand and tarnished his reputation, but in a decision issued on Thursday, a judge finds that the claims are legally naked.

The Naked Cowboy, playing guitar only in briefs and a cowboy hat, has obtained corporate sponsorships, licenses merchandise, and has a distribution syndicate. He’s become so famous that the New York Tourism Department says that he is more popular than the Statue of Liberty.

Still, his trademark rights only go so far.

In late 2010, The Bold and the Beautiful featured a character named Oliver who for several seconds during one episode also played guitar only in his briefs and a cowboy hat. Show sponsor Bell-Phillip put a recap of the episode online. CBS also posted a clip on YouTube with the title, “The Bold and the Beautiful — Naked Cowboy,” also purchasing adword advertising on “naked cowboy,” so that consumers would find it if they searched for the term.

All this activity led to a lawsuit against CBS and Bell-Phillip by Naked Cowboy Enterprises. Burck demanded the show’s $1.5 million in ad revenue for the more than 3 million people who watched and were confused.

Judge Jones notes that the mark doesn’t appear anywhere within the show. The only use of the mark is in the YouTube clip’s title, but the judge says this isn’t actionable.

“Here, the challenged phrase, ‘Naked Cowboy,’ is an example of non-trademark use,” the judge writes. “It is clear that CBS used the phrase in an effort to describe the contents of the video clip, not as a mark to identify the source of the video clips.”

CBS, represented by Levine Sullivan Koch & Shulz, is also successful in beating the Naked Cowboy’s other claims, including unfair competition, dilution, fraud, and civil rights violations. The judge agrees with the network that the Naked Cowboy isn’t in the daytime soap business, that the quality of the plaintiff’s brand was never suggested to be low quality, and that there’s really no confusion.