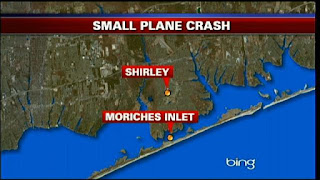 Investigators began examining the wreckage of a single-engine airplane (1946 two-seat Globe Swift GC-1A) that crashed into Moriches inlet on Saturday afternoon.  Two men were killed.  Cyril McLavin, 51 of Fresh Meadows, Queens and Andrew Messana, 72, of Bayside, Queens, were in the cockpit when the plane sputtered and plunged into waters not far from East Moriches’ Spadaro Airport, where it had just departed.

Susan Spadaro’s father, Bart Spadaro, said that the plane had spent months undergoing a full inspection and rebuilding, and departed from the small airport minutes before it crashed.

Saturday’s fatal crash is the third small-plane crash with deaths or injuries since August.

Spadaro Airport is a popular destination for recreational pilots because it is low-key, lacking a control tower and widely known as hassle free to land at and leave from.

Experts would not speculate on what caused Saturday’s crash, but said there are hazards associated with small planes on Long Island, including flying over water.

RECENT CRASHES
Aug. 26 – An M2OC Mooney crashed at East Hampton Airport.  Bystanders rescued the pilot and his passenger, who were hospitalized.

Aug. 19 – A Socata TB10 taking off from Brookhaven Calabro Airport crashed in a Shirley residential area.  A Goshen couple died, and another man was critically injured.