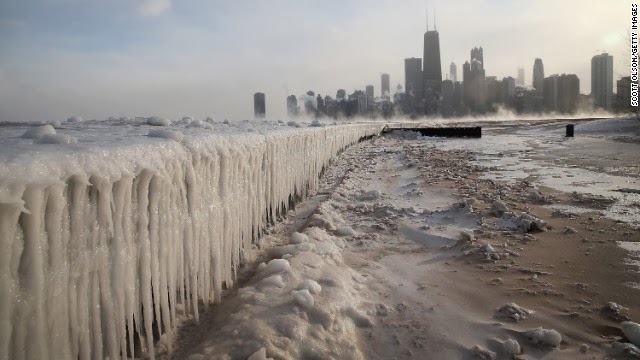 The polar vortex swirling its way across the United States is breaking new records, leaving travelers stranded on trains and in airports, and forcing the Coast Guard to cut through ice.  Even polar bears and penguins have had to take shelter indoors.
New York City saw a record low for the date Tuesday.  It was just four degrees in Central Park, breaking a record of six set in 1896. That’s not quite as bad as the all-time low of 15 below zero in 1934. But with the wind chill, temperatures still felt well below zero Tuesday — a 69-degree drop from Monday, when the weather was a relatively sultry 50 degrees with wind chill.
Temperatures plummeted below freezing somewhere in all 50 states Tuesday morning — most, but not all, due to the arctic blast hovering like an ice chest, according to CNN meteorologist Dave Hennen. (The cold regions of California and Hawaii, for example, had nothing to do with the vortex.)  In Florida, despite the low temperatures, crops were not damaged Tuesday morning, the state’s Fruit and Vegetable Association told CNN.
Hard freeze warnings were in effect from eastern Texas to the Florida Panhandle. Authorities have blamed at least 15 deaths on the cold so far, including 11 from traffic accidents and two involving hypothermia.
The record cold in many areas is putting a strain on electric grids — creating dangers that more people could lose power. “We’re past our expected peak power demand for today,” the Tennessee Valley Authority said on Twitter. “Thanks for conserving where you can.” In Alabama, 27,000 customers were without power Tuesday morning, but that figure dropped to about 18,000 as service was restored in some areas, according to Alabama Power.
At Chicago’s Lincoln Park Zoo, Anana — a polar bear who never grew the thick layer of fat that bears in the Arctic do — had to be brought inside Monday.  And at the National Aviary in Pittsburgh, bald eagles and African penguins, “who are used to temperate climates,” were taken off exhibit until the weather warms up, the facility reported.
Comments are closed.