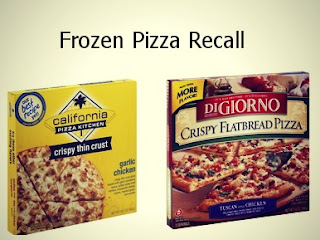 The voluntary recall is limited to frozen pizzas with these specific production codes, which were distributed nationwide.  The reason for the recall is that the pizza may contain fragments of clear plastic. Nestlé USA is taking this action after a small number of consumers reported that they had found small fragments of plastic on the CPK Crispy Thin Crust White pizza. Our investigation indicates this is directly related to a particular lot of spinach we received from one of our suppliers.

All the pizzas being recalled were produced during February and March of this year.  Nestlé has already instructed their direct store delivery team to begin removing pizzas affected by this recall at retail locations nationwide.

Nestlé USA also is reaching out to consumers to ask that they examine their freezer inventory for the specific packages of DIGIORNO and CPK varieties affected by this recall.

Consumers who may have purchased the recalled CPK and DIGIORNO pizzas with the identified production codes should not consume the pizza, but instead should contact Nestlé USA Consumer Services at 800-456-4394 or nestlepizza@casupport.com for further instructions.