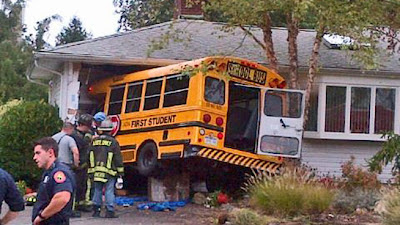 According to authorities, a school bus driver passed out behind the wheel and crashed into a house on Long Island while children were aboard.  The driver, Frederick Flowers, 66, has been arrested and charged with driving while intoxicated, police said.
He was leaving a Catholic elementary school, St. Edward the Confessor School, Wednesday afternoon when he had what fire officials initially referred to as a “medical emergency of some kind” and veered into the house on Teibrook Avenue at about 3:15 p.m., authorities said.
The five children on the bus ranged in age from 5 to 8, but none was injured, police said.
According to a hospital spokesperson, Flowers remains hospitalized in serious but stable condition at Nassau University Medical Center.
The Massapequa Park man was charged with five counts each of aggravated driving while intoxicated under Leandra’s Law, endangering the welfare of a child, reckless endangerment and two counts of driving while intoxicated. He will be arraigned in his hospital bed Thursday afternoon.
Flowers worked for the First Student bus company of Freeport, according to Nassau County police. The school where he drove to pick up kids said there had been no previous issues with the driver.
“There were no indications of any problems with this driver,” said a school spokesman. “There were no problems before the crash.”
Homeowner Dan Percell, whose house Flowers crashed into, called the situation “disgusting.”
“His job was to make sure the kids got home safetly,” Percell said.
Percell’s wife Christina had been at the bank with her daughter when the incident happened. She returned to find her house of 15 years destroyed.
“We got out of the car, and we see that there’s a school bus in the garage,” she told NBC 4 New York. “Totally, totally shocked.”
If you, or someone you know, has been injured due to the negligence of a Bus Driver called the experienced Attorneys at Buttafuoco & Associates right away at 1-800-669-4878.
Comments are closed.