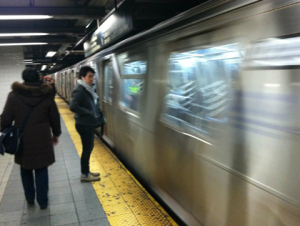 Only four weeks into the new year and already we have seen a rash of recent subway train deaths.  From innocent individuals being pushed onto the train tracks to suicides — these startling events are calling for the MTA to quickly make a decision on how to better improve safety measures on platforms.
In 2013 there have been seven deaths after being hit by subway trains, which would yield a record-breaking 100 deaths in 2013 if the trend continues.  2012 saw 55 people die out of 141 who were hit by trains. 2011 saw 47 die out of 146 struck.
On Sunday, yet another person jumped in front of a train in an apparent suicide sparking a meeting where the MTA will discuss the possibility of installing safety barriers on platforms.
“Another attempted suicide cannot become a commonplace occurrence in one of the largest transit systems in the world,” Stringer said Sunday. He spoke before the NYPD said that the unidentified man who jumped in front of an R train in Brooklyn died.
“This is a troubling and dangerous trend with serious implications for the millions of commuters who ride the subway each day,” Stringer said.
This isn’t the first time the MTA has considered the installation of safety barriers. In 2007, Crown Infrastructure Solutions, an architectural and engineering firm, began talks with the agency to build out a full network of barriers at no charge to the MTA or straphangers, in return for being able to sell advertising on built-in screens. The platform-to-ceiling barriers would have been see-through, with sliding doors that lined up with the doors on the subway cars.
But after about four years of on-and-off talks, the project stalled, and the firm moved on to other transit systems, company president Michael Santora said.
“The MTA really just never moved forward on their part. We got as far as we could,” Santora said.
“We never got any negative feedback from them that it wasn’t a good system, it’s just that no one’s ever made a real move for it,” he said, estimating that the project would’ve cost about $1.5 million to $2 million per station.
Russianoff said: “My bottom line is that people being struck or killed on a subway platform is a serious problem that deserves a serious answer. You can’t just say, it’s like the weather, there’s nothing you can do about it.”
Subway commuters agree.
“People have the tendency to cross the yellow line here and it would stop them from falling,” said Marjan Adarkwa, 26, a Baychester straphanger. “If someone is drunk or if people get in a fight and got pushed, it would stop that.”
Lin Lee, 27, of Flushing, agreed.
“Absolutely,” Lee said of building the barriers. “It’s kind of scary to listen to that kind of news so it makes sense.”
If you or someone you know has been injured on a train or subway platform call the experienced Train Injury Lawyers at Buttafuoco & Associates 1-800-669-4878