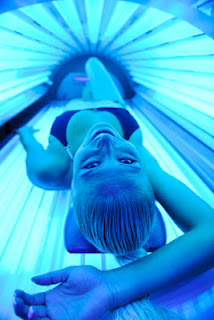 Washington, May 6 (Reuters – By Toni Clarke) – Tanning beds and sunlamps will be required to carry stronger warning labels under new regulations proposed by the U.S. Food and Drug Administration, which is also recommending the machines not be used by people under the age of 18.

The FDA said on Monday that it plans to reclassify sunbeds from low-risk to moderate-risk products, meaning they will need to be cleared by the agency before being allowed onto the market.

Faulty equipment has led to patients being burned or exposed to too much radiation, Jeffrey Shuren, director of the FDA’s center for devices and radiological health, said in an interview.

Skin cancer is the most common form of cancer in the United States, according to the Centers for Disease Control and Prevention. Basal cell and squamous cell cancer, the two most common forms, are generally curable; but melanoma, the third most common type, is deadly.

In 2009, the most recent year numbers are available, 61,646 people in the United States were diagnosed with melanoma and 9,199 people died, according to the CDC.

The FDA’s proposed regulations stop short of recommendations made by the International Agency for Research on Cancer, part of the World Health Organization, which in 2009 concluded that commercial tanning devices were more dangerous that previously thought and recommended people under 18 be banned from using them.

The FDA’s regulations also stop short of new rules being developed by some U.S. states.

More than 30 states regulate the use of tanning facilities to differing degrees. Delaware, New Hampshire and North Dakota, for example, ban the use of indoor tanning by anyone under age 14 unless medically necessary and they require parental consent for those between the ages of 14 and 18.

Some states, including Georgia, Illinois and Maine, ban tanning beds for children under the age of 14, and eighteen states require tanning bed operators to limit exposure time to a manufacturers’ recommendations and provide eye protection.

In January 2012, California became the first state to ban tanning beds for all people under 18.

The Indoor Tanning Association argues vigorously that the decision on whether a teen is allowed to suntan is one for parents, not government, and it supports parental consent. But it is fighting the growing number of states issuing bans.

“Is the next step to ban teens from sun bathing at public beaches and pools?” the association asked in a statement last year in opposition to New Jersey’s proposal to ban tanning bed use for those under 17.

“You also have to consider the health risks associated with banning teenagers from using tanning salons,” it said. “They will just go outside with no adult supervision and no trained staff where they are much more likely to get sunburned.”

The FDA’s actions follow a 2010 meeting of a federal advisory panel which unanimously recommended that the agency reclassify tanning devices. Panelists had mixed views on whether to implement a ban on minors.

An estimated 5.6 percent of U.S. adults reported indoor tanning at least once in 2010, with the highest rates among white, female 18 to 25-year-olds, according to the CDC, which notes that frequent exposure to UV rays for people under the age of 35 increases the risk of developing melanoma by 75 percent.

“For right now our proposal tries to focus on providing better information for consumers,” Shuren said, “including a warning on the tanning beds themselves that they shouldn’t be used in people under 18,” he said.

Depending on the feedback the agency receives to its proposal, it may make changes to the final order, he said.