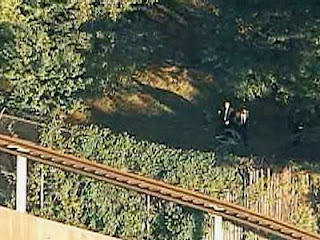 A 25 year old man, identified as David Villalobos, was riding on the Bronx Zoo‘s last windowless monorail when he suddenly climbed over the safety bars and leaped from a height of about 20 feet, cleared a 16-foot high perimeter fence and landed in the Wild Asia Exhibit. (Bronx, NY)

He was almost immediately pounced on by an 11-year old, 400 pound male Siberian Tiger named Bachuta.  The tiger caused puncture and bite wounds to the mans arms, legs and back of shoulders.  The man would have been killed if that was the tigers intentions, the zoo director said.

The man is in critical, but stable condition at a hospital where he has a punctured lung, an amputated foot and bite wounds.

The attack is the first incident linked to the monorail in its 35 year history.  Zoo officials say that safety procedures will be reviewed.

Officials will have to determine whether or not the windowless monorail car contributed to this tragic accident.  One thing is for sure….no one will be riding the last car on the monorail any time soon.

If you or someone you know has been injured due to the negligence of another call the experienced injury lawyers at Buttafuoco & Associates.  1-800-669-4878