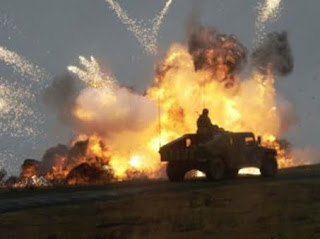 FIVE years ago I saw a television report about Iraq war veterans in California who were being treated for a new kind of brain injury. I was stunned to watch a female soldier who could no longer recognize her daughter. So I tracked down the therapist treating her and began a nine-month journey in which I interviewed dozens of vets with traumatic brain injuries and their families, eventually turning their heart-wrenching stories into a play.

These vets suffer from a particular kind of brain damage that results from repeated exposure to the concussive force of improvised explosive devices — I.E.D.’s — a regular event for troops traveling the roads in Iraq and Afghanistan.

“It’s Russian roulette,” one vet told me, “We had one guy in our company who got hit nine times before the 10th one waxed him.” An I.E.D. explosion can mean death or at least a lost arm or leg, but you don’t have to take a direct hit to feel its effects. A veteran who’d been in 26 blasts explained, “It feels like you’re whacked in the head with a shovel. When you come to, you don’t know whether you’re dead or alive.”

The news that Robert Bales, an Army staff sergeant accused of having killed 16 Afghan civilians last week, had suffered a traumatic brain injury unleashed a flurry of e-mails among those of us who have been trying to beat the drums about this widespread — and often undiagnosed — war injury. New facts about Staff Sgt. Bales are coming out daily. After we heard about the brain injury that resulted when his vehicle rolled over in an I.E.D. blast, we were told that he had lost part of his foot in a separate incident. Then we learned that the day before his rampage, he’d been standing by a buddy when that man’s leg was blown off. There are also reports of alcohol use.

People with more appropriate professional skills than mine will have to parse these facts, but from what I have learned in my work as a storyteller, this tragedy may be related to something I heard about in my interviews: a potentially lethal combination of post-traumatic stress disorder and traumatic brain injury. When the frontal lobe — which controls emotions — is damaged, it simply can’t put on the brakes if a PTSD flashback unleashes powerful feelings. Seeing his buddy’s leg blown off may have unleashed a PTSD episode his damaged brain couldn’t stop. If alcohol was indeed part of the picture, it could have further undermined his compromised frontal lobe function.

Defense Department officials have said that his brain injury was insignificant. And an individual military base has been singled out for investigation. All of this will be played out in a media frenzy, while the agony of tens of thousands with similar injuries goes unnoticed.

Doing the research for my play educated me to some of the reasons this injury continues to be back-burnered. They fit in three categories: medicine, money and memory.

Medicine: For years traumatic brain injuries — T.B.I.’s — have been scored as “mild,” “moderate” or “severe,” and this is based, in part, on the amount of time a person was unconscious — from seconds to years. Unfortunately “mild” and “moderate” sound minor and easily fixable. That may be true with a traditional brain injury. But I.E.D. brain damage isn’t always the result of a single incident in which a soldier may have blacked out for seconds. Rather, it can be the cumulative impact of several such blackouts over weeks and months of exposure to blasts that put the brain through a sudden and powerful change in atmospheric pressure, expand and contract it, and produce changes at the molecular level.

Money: the terminology “mild” and “moderate,” while technically correct, helps minimize costs for lifetime medical care and disability. In comparison, post-traumatic stress disorder is cheaper to treat and often easier to manage, and many vets told me they were routinely given that diagnosis and not tested for brain damage. One soldier, who had been given so many medications for PTSD that he carried them around in a fishing tackle box, got the proper diagnosis of traumatic brain injury months later only when his tenacious wife insisted on taking him back to be tested.

This is another danger connected to the failure to properly diagnose brain injury: the cognitive impairment of a T.B.I. can prevent a patient from remembering how many pills he took or when. I interviewed one mother whose son had been found dead from a drug overdose, face-down in the pizza he’d been eating alone in his room. She told me, “They gave my son all these drugs and they murdered him.” We don’t hear about cases like this; often they are recorded as drug overdoses or suicides.

One last story. I interviewed a gentle bear of a man, a devoted father, beloved by his troops. He told me stories of going into sudden and uncontrollable rages in Iraq. His men had to pull him back. Afterward, he was filled with regret and shame. Luckily he was given a proper diagnosis of PTSD and T.B.I. and was not redeployed. Unluckily, his inability to control his explosive rage made it unsafe for him to continue to live with his wife and child.

Finally, memory’s role, which is what drew me to this subject in the first place — the woman who couldn’t remember her own child. Don’t so many of us lose our memory when it comes to the consequences of wars fought far from home? Aren’t we all a little guilty of wanting to turn away from the shameful and painful reminders?