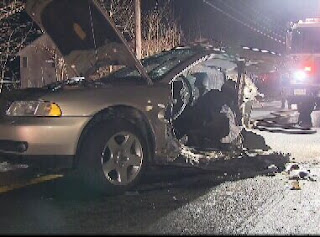 NEWBURGH – A Plattekill teenager was killed in a horrifying two-car accident Monday night on Route 32 in the Town of Newburgh.  The teen has been identified as 15-year-old Alana Tadry.
Newburgh town police say Tadry was ejected and killed instantly around 7 p.m. when the Audi she was riding in split in half after colliding with another car about a half mile north of Mill Street. The two sections of the Audi wound up about 175 feet from each other.
Chief Michael Clancy said Tadry was riding in the backseat and that back section of the car wound up in the woods not far from the accident scene. Her body was thrown about 25 feet in the woods.
Clancy said the Audi’s driver, Edward Lier, 20, of Wallkill was heading southbound and attempted to pass cars on a straight section of the two-lane road. As he was cutting back, he was struck by a northbound Chevy Malibu driven by John Dyer, 49, of the town of Newburgh. Dyer was taken to St. Luke’s Hospital with non-life threatening injuries.
Christopher Giamnarino, 19, a passenger in the Audi, was flown to Westchester Medical Center with serious injuries requiring surgery. Lier and Nicole Galgan, 18, of Newburgh, a front seat passenger in the Audi, were taken to St. Francis Hospital with serious injuries.
If you or someone you know has been seriously injured in a car accident call the experienced auto accident attorneys at Buttafuoco & Associates 1-800-669-4878.
SHARE