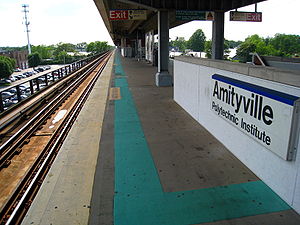 MTA police are investigating how a Yonkers man apparently was hit by a Long Island Railroad train in Amityville early yesterday.

Metropolitan Transportation Authority spokeswoman Marge Anders said the engineer of an eastbound train pulling into the Amityville station about 2 am noticed Michael Pineda, 23, lying between a running rail and the electrical third rail about 200 feet west of the station.  The engineer was able to stop the train before it reached Pineda.

Pineda was taken to Nassau University Medical Center with injuries “that were consistent with having been struck by a train,” Anders said.  He was undergoing surgery yesterday and is listed in stable condition and is expected to survive, she said.

Anders said police are trying to determine which train might have hit the man and how he got near the tracks.

If you or someone you know has been injured on a train platform, train tracks or on the train contact the experienced lawyers at Buttafuoco & Associates 1-800-669-4878