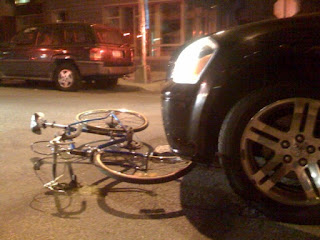 A 13-year old robbery suspect riding a bicycle was struck by an unmarked Hempstead police car after the breaks failed on the vehicle.

Yesterday, detective had been following the boy, whom authorities suspected of being involved in a robbery at Fulton Ave. and Washington St., when the vehicle they were driving had a brake failure and struck the boy.

The boy suffered minor injuries, was placed in custody and taken to a hospital as a precautionary measure.  The boy did not know he was being followed when he was struck by the car in from of the Hempstead Bus Terminal.