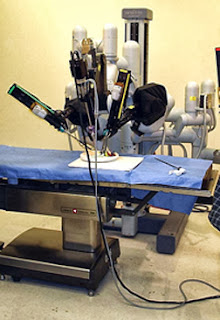 In March of  2009, Erin Izumi, a 30 year-old woman from Tacoma, Wash., had robotically assisted surgery to treat endometriosis. The procedure at St. Joseph Medical Center dragged on for almost 11 hours.

A week and a half later, Ms. Izumi was rushed to an emergency room, where physicians found that her colon and rectum had been torn during the surgery. She was in the hospital for five weeks, undergoing a series of corrective procedures to repair the damage, including a temporary colostomy, according to her attorney Chris Otorowski.

But even though medical device manufacturers and hospitals are required to report every device-related death and serious injury to a database maintained by the Food and Drug Administration within 30 days of learning about an incident, no report about the case was made in 2009. Hospital officials declined to comment, and a spokeswoman for the manufacturer said it became aware of the incident only when Ms. Izumi filed a lawsuit. It disputed the claim and settled the case in May 2012.

That was not the only lapse in reporting problems with robotic surgical equipment, a new study has found.
The equipment, called the da Vinci system, is made by Intuitive Surgical Inc. of Sunnyvale, Calif. It has been on the market for more than a decade; more than a million procedures have been performed with it. Between January 2000 and August 2012, thousands of mishaps were reported to the F.D.A. In the vast majority of cases, the patient was not harmed, but among the reports were 174 injuries and 71 deaths related to da Vinci surgery, according to a study published last week in The Journal for Healthcare Quality.

Yet by combing news reports and court records, researchers at Johns Hopkins were able to find examples of botched operations that were not reported to the agency. They concluded that adverse events associated with the da Vinci were “vastly underreported.” The consequence is that little is known of the real disadvantages of the equipment, and the injuries and deaths it may cause, even as robotic surgery is widely marketed to consumers, Dr. Zuckerman said.

Nevertheless, robotic surgery has grown dramatically, increasing more than 400 percent in the United States between 2007 and 2011. About 1,400 da Vinci systems, which cost $1.5 million to $2.5 million, have been purchased by hospitals, according to Intuitive’s investor reports.

The expansion has occurred without proper evaluation and monitoring of the benefits, said Dr. Martin A. Makary, an associate professor of surgery at Johns Hopkins and the senior author of the paper.
“This whole issue is symbolic of a larger problem in American health care, which is the lack of proper evaluation of what we do,” Dr. Makary said. “We adopt expensive new technologies, but we don’t even know what we’re getting for our money — if it’s of good value or harmful.”

A 2010 study found that 56.8 percent of surgeons surveyed anonymously said they had experienced irrecoverable operative malfunctions while using the da Vinci system, Dr. Makary noted.
Women were more likely to be harmed during the robotic procedures, Dr. Makary and his colleagues found. Nearly one-third of deaths that were reported to the F.D.A. database occurred during gynecologic procedures, and 43 percent of the injuries were associated with hysterectomies.
“Any time there is a serious problem with the da Vinci, it should be reported,” Dr. Zuckerman said. “It’s the F.D.A.’s job to figure out whether this is a problem related to the device or a doctor error.”

If you or someone you know has been injured due to a defective medical device or negligence of a doctor call the experienced medical malpractice and defective products attorneys at Buttafuoco & Associates. 1-800-669-4878