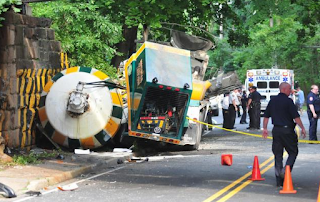 A cement truck slammed into a Long Island Rail Road overpass while it was heading south on Oyster Bay Road near Matinecock Court in Locust Valley and then collided with a school bus killing the BUS DRIVER and injuring six passengers – including four children.
One of the police officers at the scene said the impact from the LI Rail Road overpass knocked the barrel loose from the cement truck, causing the truck to swerve out of control and into oncoming traffic.
The bus, owned by the Locust Valley Central School District, was in the northbound lane and in the direct path of the truck.
The bus, carrying four children who were hurt (all listed in stable condition) were on their way home from a summer day camp for developmentally disabled children.
According to people at the scene a male aide on the bus and the cement truck driver were also taken to area hospitals.
If you or someone you know have suffered a serious injury as a result of a negligent driver call our office immediately to speak with an experienced attorney.  1.800.669.4878 (1.800.NOW.HURT).
Comments are closed.