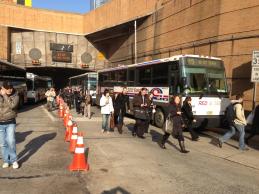 Around 7:15 a.m., a New Jersey Transit bus and a Martz Trailways bus collided in an express bus lane approaching the Lincoln Tunnel on the New Jersey side, said Ron Marsico, a spokesman for the Port Authority of New York and New Jersey.

About two hours later, also on the New Jersey side, a bus and a truck were involved in another accident, causing at least one serious injury, Mr. Marsico said.

The accidents arrived on a day when some travelers in the state appeared poised for an easier commute, after nearly two weeks of stifling gridlock since Hurricane Sandy.