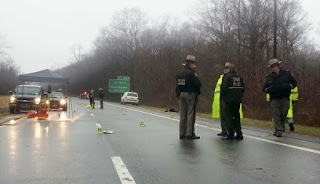 A long island woman from Coram was struck and killed by three cars on the Northern State Parkway in Commack, State Officers said.
She was later identified as Sheila L. Robinson, 50, of 9 Country Club Rd., according to Senior Investigator Thomas Hughes of the Major Crimes Unit of Troop L.
State police spokesman Frank Bandiero said the accident, which occurred at 6:11 a.m. between Exits 42 and 43 on the westbound roadway, remains under investigation.
It is not clear why Robinson was on the parkway, he said.  Anyone with information regarding this incident is being asked to contact investigator Richard Esposito at 631-231-6389.
The driver of the Volkswagen Passat, the first car to strike Robinson, left the scene but was later found, police said. Two other vehicles also hit her, he said. No charges were filed.
The accident closed the road between the two exits for several hours, police said.
This is the second fatal crash Commack has seen in as many weeks.
If you or someone you know has been injured in a car accident call the experience Vehicle Accident Lawyers at Buttafuoco & Associates 1-800-669-4878
SHARE