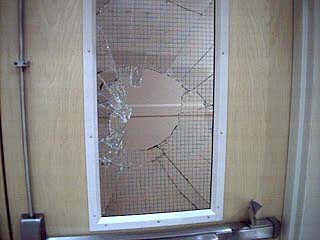 There are are approximately 2,300 school injuries yearly caused by unsafe wired glass.  Recently, the Portland Public School district was found negligent by an Oregon jury for not replacing a dangerous wired glass door panel.

In this injury case a 13-year-old student was rushing to class and attempted to open the door by kicking the metal crash bar.  She ended up slipping and her leg went easily through the lower wired glass pane severing two major nerves and 70% of her Achilles tendon.

During the trial, it was revealed that the state superintendent had issued a memo alerting all superintendents of the dangers of wired glass, and that the Portland district had lobbied against a state bill that would have required school districts to replace all wired glass in hazardous locations.

The wire threaded throughout the glass actually weakens the glass and increases the chances of breakage even under the relatively mild force.  Even worse, a student’s hand or leg that passes through the easily broken wired glass panel can be snared by the wire making resulting injuries more severe.