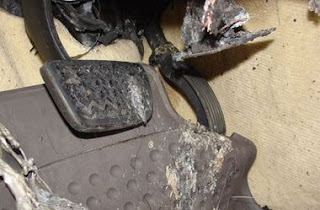 GRAND RAPIDS, MI – Months before Toyota Motor Corp.’s $1.1 billion settlement of a class action lawsuit, the Japanese automaker settled a long and hard fought battle in Kent County Circuit Court over claims that their cars were prone to sudden acceleration.

In the summer of 2011, Toyota Motor Corp settled two injury cases brought after an August 2008 car accident in which a 2007 Lexus ES350, made by Toyota, careened out of control after its throttle stuck underneath a floor mat.  The runaway car struck a minivan injuring 65-year-old retiree Charles Harrell with a broken pelvis, eight broken ribs, a broken leg and a punctured lung that kept him in the hospital for nearly a month.

Toyota has taken a very aggressive defense stance throughout all of this even though countless lives have been put in danger.

Those injured by the car defect claim the vehicles should have been equipped with a throttle override that activated when his they stepped on the brake. They also argue the dealership should have fixed the defect that caused the floor mat to bunch up under the accelerator pedal.

If you or someone you know have been injured due to a defective car product call the experience product liability attorneys at Buttafuoco & Associates 1-800-669-4878.