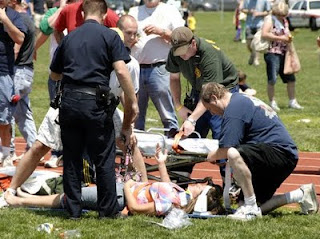 By FRANK ELTMAN and JOHN SEEWER

OCEANSIDE (WABC) — Bodies began tumbling when a two-story red, white and blue inflatable slide went soaring into the air at a youth soccer tournament Saturday. Two other inflatables also flew off the ground that breezy afternoon, causing youngsters to suffer bumps and bruises but critically injuring a mother who had an inflatable crash-land on her.

Fathers, coaches and bystanders sprinted toward the airborne amusement rides, some grabbing knives to furiously stab the rubber-filled edifices before anyone else was injured. “I never thought there would be any serious issues, any concerns with safety,” one father, Mike Perniches, later told The Associated Press. “But now, I’m like, forget it.”

Thirteen ended up at the hospital that day। And people in Oceanside, on Long Island, learned a lesson that is becoming all too familiar: Inflatable amusement rides – with their hit-and-miss regulation and a lack of industry-wide standards – can endanger lives when not properly installed or operated.

At least 10 inflatables around the country have been toppled by winds or collapsed under too much weight in the last two months, injuring more than 40 people, according to www.rideaccidents.com, a website that tracks amusement ride accidents.

In a little more than a week beginning in late April, two slides collapsed at separate events in California, injuring nine children, according to media reports.

In Arizona, two accidents in the Tucson area injured four children, including sisters who were inside a bounce house in February when wind bursts tossed it onto a roof. In April, a boy and girl were in a bounce house that was blown across three lanes of traffic.

“I wish this was a rarity, but it’s not. It happens all the time,” said Jim Barber, a spokesman for the National Association of Amusement Ride Safety Officials, based in Brandon, Fla. “These are probably the most dangerous amusement devices they have.”

It’s not the rides that are the problem, he said, it’s the way they are set up and supervised.

Too many companies that rent inflatables will drop them off at a party with little instruction, said Barber. “If they’re going to rent these things, they should be rented with an operator,” he said.

“A lot of times they never get anchored down, they put too many kids in, they put two- and three-year-old kids in with a 16-year-old,” said Barber, who oversaw New York State’s ride inspectors before retiring.

“They don’t fly away if they’re properly installed,” he said.

Police on Long Island did not immediately have the name of the vendor who provided the rides at the Oceanside United Soccer Club festival on Saturday. Nassau County District Attorney Kathleen Rice said her office would investigate the circumstances surrounding the accident.

A woman identified as Cathleen Hughes, 36, of Oceanside, suffered head and spinal injuries when the flying slide landed on top of her, according to Newsday. An update on her condition was not immediately available from South Nassau Communities Hospital in Oceanside, where she was being treated.

“She was walking on the track and it hit her,” Perniches said. “She was lying still on the ground, there was blood coming out of her mouth.”

Most injuries from inflatables involve bumps and bruises but, as in Oceanside, there are more severe hazards. Most accidents are caused by improper anchoring, high winds and lack of supervision, according to a risk management advisory which New Hartford, N.Y.-based Utica National Insurance issued to groups which use inflatables.

A Pennsylvania man died June 2010 just days after an inflatable slide collapsed and pinned him at a Cleveland Indians game.

A 5-year-old boy was killed in March 2010 when he fell off an inflatable and landed on a concrete floor at an indoor entertainment center in Wichita, Kan.

In January 2010, winds blew a bounce house at Florida birthday party into a pond with a 5-year-old girl inside. Neighbors pulled the child out of the water.

Regulating amusement rides is left up to each state. While most have laws and inspectors overseeing mechanical rides at amusement parks and fairs, only a handful give inflatables the same scrutiny.

Barber, the spokesman for the National Association of Amusement Ride Safety Officials, said states don’t have enough inspectors or money to keep up with the thousands of bounce houses and inflatable slides in operation. Still, he thinks it would be a good idea for all states to regulate them.

The Archdiocese of Cincinnati banned inflatable rides at southwest Ohio church festivals in 2009 after a boy was injured when a gust of wind flipped over a slide at a softball tournament sponsored by another group. The wind tossed the slide about 70 yards, carrying the 11-year-old boy with it. He came away with just bruises.

A Consumer Product Safety Commission report released in 2005 linked the growing popularity of inflatables with an increasing number of injuries treated at hospital emergency rooms from 1997 to 2004.

The Consumer Product Safety Commission warns that operators should anchor inflatables to the manufacturer’s requirements and that bigger rides such as slides should have a least two people operating them. It also says weight limits should be watched closely.

The escalating problems and lack of industry-wide standards led a group of inflatable operators to form a trade association in 2003 to promote safety and develop guidelines and training programs. The Responsible Operators of Amusement Rentals has about 50 members, most on the East Coast. That’s a fraction of the companies operating today.

Michael Mazzocco, who was coaching his 6-year-old daughter’s soccer game when the inflatables went airborne Saturday on Long Island, said it was difficult at first to believe what he was seeing.

“We were all sprinting toward it, trying to grab the bug one and get the air out of it,” he recalled. “There was kind of pandemonium at first with kids not knowing where their parents were and parents on the other side trying to find their children. There were a few tense moments.”

He said his wife, who was shooting video of the soccer match, immediately turned the camera on the flying projectiles.

“We’re just hoping that this is a lesson for others to make sure these things are anchored properly,” he said. “I don’t know if that was the case here, but it is always windy down there. It we can get someone to make sure this doesn’t happen again, I will be happy.”