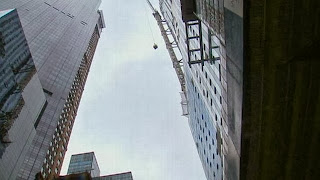 Almost exactly a year after a construction crane collapsed under the extreme conditions of Superstorm Sandy, the crane that replaced it developed problems that shut down part of Midtown Monday, and forced evacuation and shelter in place orders for thousands of people.

The culprit: a 13,500 pound concrete block that dangled over one of the city’s busiest streets.  57th Street, between 6th and 7th Avenues, is the location of One57, a 1004 foot tall skyscraper that will be the tallest residential tower in the city, and, in fact, all of the Western Hemisphere, once it’s completed.  Getting to that point has proven to be no small task.
“This crane is cursed,” said Lefteris Daskapulos.  ”All the time, something’s going on with that crane,” said Daskapulos, the manager of a restaurant a few doors east of the record-breaking superluxury building under construction.

It all happened while a tornado watch was in effect.  The NYPD, FDNY, Office of Emergency Management (OEM) and Department of Buildings were all concerned that a forecasted severe storm could produce sustained winds and gusts so strong that the concrete weight would end up swinging like a pendulum and hit buildings.  Another emergency scenario envisioned the nearly seven ton weight falling off in the winds.

That was why ConEd and the Department of Public Works were brought in, to depressurize a steam tunnel running under 57th Street, and to turn off a water main and monitor a gas line in the block.  If any of that infrastructure was impacted by a 13,500 pound weight falling 43 stories, there could have easily been flooding or an explosion, or both.  A construction accident of this magnitude could have seriously injured thousands of people.