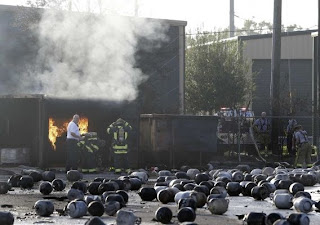 TAVARES, Fla. – A series of explosions rocked a central Florida propane gas plant and sent “boom after boom after boom” through the neighborhood around it. Eight people were injured, with at least four in critical condition.

John Herrell of the Lake County Sheriff’s Office said early Tuesday that no one died despite massive blasts that ripped through the Blue Rhino propane plant late Monday night. Officials initially scrambled to find more than a dozen employees after the explosions.

Tavares Battalion Commander Eric Wages said five workers walked up to a command center firefighters set up near the plant Monday night with skin hanging off their arms, torso and faces. He said their arms were outstretched and they were in complete shock.

The Blue Rhino plant, which is northwest of Orlando, refilled propane tanks typically used for barbecues and other uses. There were some 53,000 20-gallon tanks at the plant on Monday.

Tuesday morning, smoke still billowed from a storage container on the property, which consists of a couple of warehouses next to each other. The parking lot was littered with thousands of blackened 20-gallon propane containers.

Croughwell said firefighters who responded to the initial fire had to wait to enter plant site because conditions were so dangerous. Just as they were finally about to go in, four tractor-trailers parked next to the large propane tanks caught fire.

If the large tanks exploded, Croughwell said, “it would have wiped us out.”
Video footage on WESH-TV in Orlando showed fires burning through trucks used to transport propane tanks, which were parked at the plant. The fire sent plumes of smoke into the air hours after the blast.
Keith said the explosions shook his house several miles from the plant. “It truly sounded like a car hit our house,” he said.