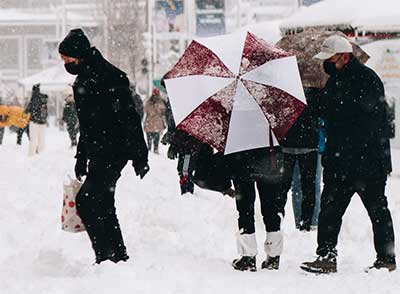 If you’ve lived in New Jersey for any amount of time, you’re likely familiar with what is known as the ongoing-storm rule, which essentially relieves commercial property owners of the responsibility of shoveling, scraping, or de-icing their property during a snow or ice storm. The rule has long been a source of irritation for those injured on unsafe commercial properties during winter. Recently, however, the New Jersey Appellate Division decided that the ongoing-storm rule will no longer apply in the state of New Jersey. I’ll tell you more about what this could mean for your slip and fall case below, as well as when a Northern New Jersey slip and fall attorney at Buttafuoco & Associates may be of help.

What is the New Jersey Ongoing-Storm Rule?

In a nutshell, the ongoing storm rule holds that commercial land owners do not have a duty to keep their premises clear of snow and ice until after a storm has ended and a reasonable amount of time has passed. Essentially, a commercial owner has no obligation to keep their property reasonably safe while snow or ice is still falling. As you can imagine, this often leads to serious slips, falls, and accidents as people enter and exit businesses or walk through icy parking lots during dangerous storms. Under the ongoing-storm rule, a property owner who failed to shovel or de-ice would not have been held liable for the victim’s injuries.

The case that led to the recent ruling (Pareja v. Princeton International Properties, et. al.) involved a slip and fall on a concrete driveway during a snowstorm. The trial Court where the case was initially heard dismissed the plaintiff’s complaint outright, citing the ongoing storm rule. However, the Appellate Division determined that the ongoing-storm rule does not apply in New Jersey.

Under the Appellate Division’s decision, commercial land owners must now take reasonable steps to ensure that they keep any walkways on their property which are covered by snow or ice reasonably safe. This is true even during snow or icefall.

It is important to note that the Court’s ruling does not necessarily mean the property owner is liable for all slip and fall injuries sustained during an ongoing storm. For example, it does not require landowners to take unreasonable steps to clear all snow or ice from their property. Instead, it only demands that landowners be more cautious and act prudently when safety on their premises during a storm is a concern.

What to do if You Slip and Fall on Commercial Property

If you previously thought the ongoing-storm rule prevented your landlord from putting salt on the sidewalks during a serious ice storm, or your employer from shoveling the parking lot, this is no longer the case. If you fall in a situation where you believe the property owner was negligent, you may be entitled to compensation for medical bills, lost time from work due to your injuries, or other expenses related to the slip or fall.

If you are able to do so after your slip or fall, take photographs of the issue that caused your accident and document any weather conditions. Also make sure to write down the date and time of the incident so that the weather details can be confirmed. If there were witnesses, get their names and numbers. Finally, visit the emergency room, urgent care, or your doctor’s office immediately to ensure that you receive a proper diagnosis and medical treatment you’ll need.

After this is taken care of, it’s time to get in touch with a Northern New Jersey slip and fall attorney who can help you understand your rights and fight for the compensation you deserve. Buttafuoco & Associates has been helping citizens with slip and fall cases for decades, and we provide free consultations on all personal injury cases.