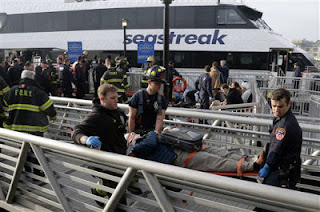 The Seastreak Wall Street ferry hit the dock pulling into Pier 11 near the South Street Seaport just before 9 a.m., opening a huge gash on the front side of the boat.

“You couldn’t tell it was getting ready to dock it was just coming in you didn’t know it hit something and it was a disaster,” said Tony Lucia, an injured ferry passenger.  “Everyone flew, everyone just flew, and people were on the ground,” Lucia said.

It took more then two hours for paramedics to treat victims on site.   There were 343 on board at the time, including five crew members.  Some of the passengers suffering serious head injuries.
“Nothing seemed like it was going to be out of the ordinary,” passenger Chris Avore said. “There was once or twice where I was talking with a colleague where we actually thought it was coming in a little hot near Brooklyn, where we’re not used to seeing it. Then the next thing we knew, you feel the jolt and then everybody goes flying.”
Dozens of people were taken from the ferry on stretchers, rushed to New York Downtown Hospital or New York Presbyterian Hospital-Weill Cornell Medical Center on the Upper East Side for treatment. Hundreds were evaluated on the dock in a makeshift triage area and on the ferry.
“Once you basically pass the Statue of Liberty, you pretty much know that you’re going to be there soon, so a lot of people start standing up, milling around, getting their coats and everything like that,” Avore said. “Anybody who was standing went to the ground.”
Most of the injuries were on the upper level, where the people were standing while waiting to disembark. The man who suffered the critical head injury apparently fell down the stairs, possibly cracking the window. He was reportedly rushed into surgery and has been upgraded to stable condition. The second person critically injured also suffered a head injury.
The cause of the crash is unknown, but sources say the catamaran only recently was put back into service after being damaged during Superstorm Sandy. The Coast Guard was on site inspecting the vessel and the pier, which reopened shortly after noon. The National Transportation Safety Board has also dispatched a team to investigate the crash. 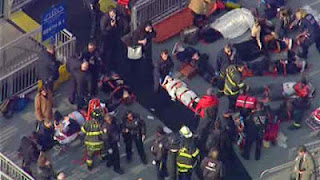 The captain of the Seastreak Ferry told federal investigators the vessel had a mechanical failure that prevented him from putting the boat into reverse.
Unfortunately, the Seastreak Wall Street has been in several accidents before.  Coast Guard records state the ferry hit a cluster of fender piles while docking in 2010, punching a hole in the ship’s hull. In 2009, it suffered another tear on the bow after another minor docking collision. No one was injured in either of those mishaps.
The naval architecture firm that designed the reconfiguration, Incat Crowther, said in an August news release that the ferry’s water-jet propulsion system had been replaced with a new system of propellers and rudders to save fuel costs and reduce pollution. The hull was also reworked and the ship made 15 metric tons lighter. At top speed, the ferry travels at around 35 knots, or 40 mph.
Ferry accidents are all too common in New York.  In 2003, a Staten Island Ferry crashed into a pier on Staten Island after its pilot passed out at the wheel killing 11 people. Three people were badly hurt and about 40 injured when the same ferry hit the same pier in 2010 injuring 43 people.
If you or someone you know has been injured due to a ferry accident call the experienced Ferry Accident Maritime Injury Lawyers at Buttafuoco & Associates 1-800-669-4878
SHARE