Postal worker dies after his truck is hit from behind 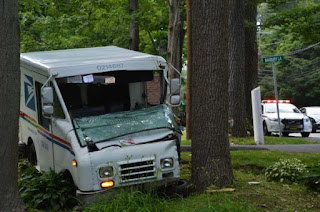 A postal worker whose truck was rear-ended before it crashed into a tree in Lloyd Harbor has died, Lloyd Harbor Village Police said.

A police spokesman said Suffolk County’s Second Squad is investigating the death of the worker, whose name has not been released.

The worker, a man, was driving a postal truck on West Neck Road near Banbury Lane at about 3 p.m. when he reportedly was rear-ended by another vehicle, went off the road and struck a tree.

Alan Nobile, 53, of West Islip, was taken to Huntington Hospital to be treated for nonlife-threatening injuries, police said. But that night, as an ambulance was taking him to another hospital for treatment, he went into cardiac arrest and died, his family said.

The cause of the accident may have been inattentive driving by the driver of the Audi, but it was not related to texting or cellphone use, police said.