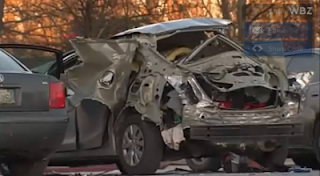 A woman, named Jackie, in Massachusetts tried to unlock her car trunk in the parking lot of a supermarket using a keyless remote… and then, just like out of a James Bond movie, the car exploded.

The blast destroyed the woman’s Honda Civic and sent people running to the parking lot to see what had happened.

After a bomb squad thoroughly investigated the car it was determined the woman’s boyfriend put welding equipment in the trunk. The keyless remote set off a tiny electrical charge that caused it to blow up.

The explosion was so great that it jolted nearby shoppers and neighbors who rushed to the scene. Jackie says she’s just thankful that no one was hurt. “There was a guy parked right next to me loading up his car so I don’t know how he didn’t get hurt,” she said. ”My trunk went flying over this whole row of cars into the next row, so I’m just thankful no one got hurt because it could have turned out really bad.”